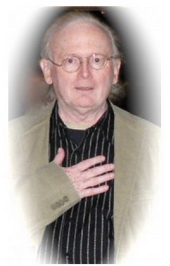 “Dream as if you’ll live forever. Live as if you’ll die today.”
This last bit of Strephon’s advice was printed on a memorial card given to those who attended a goodbye service for him following his death from lung cancer. The service was held on Tuesday, October 27 at the Rouwcentrum Nijmegen, the Netherlands, and was attended by his wife, Stefania Marian-Williams and a circle of friends, including IASD member Hermine Mensink. Together they closed the casket on the body of this ever so wise man who contributed far more than most people remember to the current growth in the study of dreams and practice of dreamwork, and to IASD itself.

Born to Oscar Williams, American’s leading poetry anthologist of the 50s and 60s, and Gene Derwood, a poet and painter, he received M.A. degrees in English Literature and Counseling Psychology. After ten years of training and leadership with the Guild for Psychological Studies in San Francisco, CA, with studies in Jungian psychology, he practiced as a Marriage, Family and Child Counselor in CA. He became chief therapist at St. George Homes, Inc. Berkeley, CA for four years, and trained there with Dorothea Romankiw, the second most important teacher in his life and his compassionate friend.

Ten years of intensive training followed at the Guild for Psychological Studies, under Dr. Elizabeth Boydan Howes, his greatest life teacher, analyst, friend and passionate journeyer through life, via Jungian psychology and a Records of the Historical Jesus teacher. He became licensed to practice psychotherapy and counseling in the State of California.

In 1977 he founded the first dreamwork training institute, the Jungian-Senoi Dreamwork Institute in Berkeley, CA. In 1978 he published through his own Journey Press, the first edition of the Jungian-Senoi Dreamwork Manual, the first comprehensive dreamwork manual ever published. It became a classic in the field and was a book that led me, as a personal dream appreciator wishing to understand my own dreams, to recognize the genius of the man behind the book.

Strephon wrote, “In 1980 I had my first year-long dreamwork training class for professionals and published the full revision of the Jungian-Senoi Dreamwork Manual, Journey Press. This was the first professional dreamwork training program not associated with any one psychology but based on methodology and results.”

He published Seedbursts and Transforming Childhood in 1987 and moved to England in 1988 to live and teach dreamwork there and in Europe. In 1991, he published the first Dream Cards ever (Simon and Schuster) which became a best seller at over 110,000 copies sold and they are still selling in some countries. The Dream Cards have hundreds of images taken from actual dreams which reflect their possible meanings and lessons using a Jungian approach to life as a hero(ine)’s journey. For me and some of the groups I led, they became an important tool of self-discovery and an experience of synchronicity. In 1991 The Elements of Dreamwork, Element Books, was also published in eight languages.

He wrote: “From 1989-2008 I have taught from one to four year dreamwork training programs in Britain, Netherlands, Norway and Romania, being perhaps the first major dreamwork trainer with a complete methodology, curriculum and standards for professionals who were certified by me. In 2003 I declared a separate branch of psychology, ‘Dreamwork Psychology,’ whose clear focus is on dreams and dreamwork methods for actualizing dreams, none of which are part of any one psychological approach.”

Of all the products of Strephon’s lifetime, perhaps the most important to us at IASD was his early dream to start an organization open to all that would focus on all forms of dreamwork, professional and personal. Strephon wrote: “In 1983-1984 I originated and convened the co-founders of the first international association for the study and appreciation of dreams and dreamwork, The Association for the Study of Dreams, now IASD. This was my stance that dreams and dreamwork should themselves be a separate field of human experience, defined and studied on its own. I have never been officially recognized for this, but it is definitely part of my biography!”

Co-founder Patricia Garfield wrote: “I do think it is only fair to Strephon and his honoring that it be acknowledged that he was the person who first called for a meeting among (us) four.” (Patricia Garfield, Gayle Delaney, Jeremy Taylor and Strephon who were later joined by Stephen LaBerge and John Van Damm, all of whom are considered by IASD’s historians to be IASD co-founders.)

“The initial meeting took place on Thursday, November 11, 1982. Strephon’s idea for a national dream conference was an extension of a smaller conference he held called the Berkeley Dream Fest. We chose the name Dream Explorers International at that first meeting, based on a dream Jeremy had.” The name was subsequently changed before the first (1984) conference to the Association for the Study of Dreams.)

Jeremy Taylor recently wrote to me of Strephon, “Even before the founding of IASD, Strephon Kaplan Williams was a pioneer in applying archetypal insights and perspectives on dreams and dreaming to ‘lay’ efforts to work with dreams and understand them more deeply. He was also instrumental in helping several other Jungians and archetypalists toward overcoming the ‘chilling effect’ of Jung’s stringent rejection of group exploration of dreams.

Like Jung himself, Strephon worked with a remarkably wide range of dreamers, including profoundly disturbed, institutionalized people – particularly the schizophrenic and autistic children and adolescents at Saint George Homes, Inc. Here there was a residential treatment program based on the clinical insights and practices of Carl Jung which operated for two decades based in Berkeley, under the astute leadership of founder/director Dorothea Romankiw. Strephon and I first met at Saint George, and it was from the relationship we forged there that he and I joined with Patricia Garfield and Gayle Delaney to found IASD. Those of us who knew him well are particularly saddened by his death and at the prospect of his absence from the on-going global conversation about dreams, dreaming, and our collective future as a species of dreamers.”

We learned of his fatal illness prior to our 2009 conference in Chicago where on opening night I hosted an IASD 25th Birthday/Anniversary Celebration briefly tracing IASD’s history by interviewing some of those who were at the first conference in 1984 and those who are currently in leadership positions with IASD. Strephon by then was too ill to attend though I had informed him of my plan, but Patricia Garfield spoke lovingly of him and his part in having his big dream come true, the creation of an international multidisciplinary dream association open to all dreamers everywhere.

In discussing how we could send him a message of our thanks and support, Wendy Pannier had a perfect idea. Using a flip chart placed on an easel outside one of the main conference rooms, conference attendees were invited to write to him with colored pens and markers she provided, and they did—many, many messages of thanks to him for all he had done for dreams and dreamwork during his lifetime. The chart was rolled up like a scroll and mailed by ever-helpful Richard Wilkerson to Strephon in the Netherlands. We received a touching e-message from him expressing his great pleasure in reading the thanks and praise of those of us who knew him, but also those he had never met. The dream world will miss Strephon, but only his physical form. His spirit lives on in his work and in the example he has provided to all of us to follow our dreams.

Epilogue: Hermine Mensink went home with Stefania after the memorial services to find IASD’s flowers and expressions of sympathy to his wife and two daughters awaiting them. One of his daughters, Alison, had suggested that a favorite poem of Strephon’s, Do Not Go Gentle Into That Good Night by Dylan Thomas, be read at the memorial service, but this beautiful work was eclipsed by a poem written by Strephon which Stefania had printed on the back of his memorial card, thanking those who mourned with her. Hermine provided us with a copy of it. This, perhaps his last poem presents a clear picture of a strong but gentle man who embraced his pain, actively living his dying, and affirming the power of love.

“I was glad to have to opportunity this past June at the annual conference of the International Association for the Study of Dreams in Chicago, to bear witness to the value of Strephon Kaplan-Williams work, especially to say that it was by the invitation of Strephon that the four of us who became co-founders, later joined by another two people, that we first met on Thursday, November 11, 1982 and began the discussions that lead to the creation of the organization that became IASD.  Although we all contributed our parts, it was Strephon’s initiative and idea that led to the group’s formation.

Aside from leading to the group’s development, Strephon contributed with his own writing, particularly the Jungian-Senoi Dreamwork Manual.  One of my favorites of his from later times is his Dream Cards.  Strephon has made valuable contributions to the field of dreams and will be well remembered beyond his immediate loved ones“.

Patricia Garfield, Ph.D.
Author of Creative Dreaming
Co-founder and President  (1998-1999), The International Association for the Study of Dreams

What is Dreamwork Psychology?